‘Kelvin Dunrobin ABC rural news of progress in the planning. “The picture I have come up with is we’re going to have all-Aboriginal cattle ranches, and farmers and stockmen, all through the line, to sell cattle under the Aboriginal beef banner,” Dunrobin said. With Aboriginal-owned abattoirs and butchers already operating, “the sky’s the limit”. It will be good for us to see our own mob get together again because we’ve been separated our whole lives. So if we can get together with the same purpose, the same goal, we can get ahead,” he said.’

I’ve been doing a lot of reading lately about Aboriginal stockmen and their pivotal role in the beef cattle industry in Australia so I am very excited by this: vertical integration as they say these days, but also giving back control to the communities who for so long had no stake in the industry.

‘The Australian organics market is now estimated to be worth $2.4 billion, and has grown 88% since 2012, the launch of the Australian Organic Market report for 2018 is no surprise to suppliers of organic food.’

Nothing to add to this great news.

What happens to small towns whose water becomes big business for bottled brands?

‘But water corporations have finite resources, and if we want in-depth analysis, then we need to invest in management planning tools such as drilling programs and numerical groundwater models supported by monitoring data and surveys of groundwater-dependent ecosystems. This sort of analysis is time-consuming, expensive and currently a political stretch. Governments only tend to spend serious money on groundwater investigations once people start running out of water.’

We’ve learned nothing from the disastrous lack of planning and monitoring of our surface water systems. 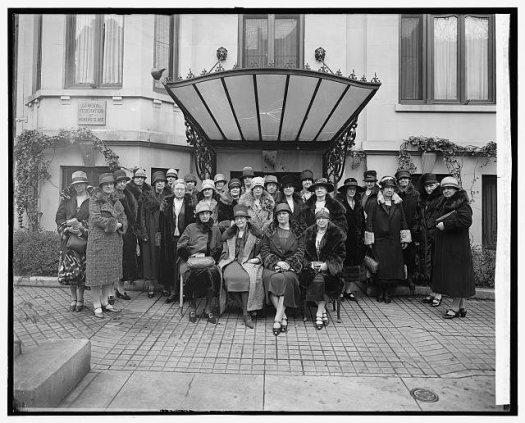 Members of the general federation of women’s clubs in the 1920s. Photo from Gastro Obscura.

The Feminist Lunch That Broke Boundaries 150 Years Ago

‘The club flourished, and by the end of its first year, 83 female historians, writers, artists, and physicians attended its precedent-setting lunches. Before Sorosis’s founding, wrote Lately Thomas in his book Delmonico’s: A Century of Splendor, there had been “no garden clubs, no bridge clubs, no associations for professional women, not even church or missionary societies carried on solely by women.” Sorosis sparked a slew of women’s clubs across America, and many Sorosis branches are still active today. The lunch at Delmonico’s in 1868 kickstarted the emergence of women into the public sphere.’

I don’t know of any comparable incident in Australia history. I’d love to hear from anyone who does.

And in other feminist news…

‘Nuns around the ancient port city of Catania, located on Sicily’s east coast, paid tribute to their patron saint by baking pastries shaped like her breasts.’

“An Epic Experiment in Community and Food”

‘At the AMC, Pao and the rest of the Cuir Kitchen Brigade collective will lead a canning workshop, as well as host a conversation around continuing the work that they’ve been doing since Maria—“how to turn a solidarity project that came from an urgent need into a more long-term project,” as Pao said. Tara, in addition to participating in several AMC sessions, will speaking on the opening plenary of the AMC. Additionally, the group Interlocking Roots will be hosting a Food Justice Networking Gathering for Queer and Trans Black and Indigenous People of Color, “a chill space for fellow QTBIPoC to connect, affirm queer and trans identities through our own and our plant ancestor stories, talk about queer ecology, strategize and eat together!”

Following on from the posting in the last edition of Diggings, an exhilarating example of transformative gastronomy.

‘Sodi and Williams are both stubborn enough that they “try not to be together in the kitchen,” Sodi says wryly. Fortunately, each owns her own restaurant (Williams oversees the French bistro Buvette; Sodi runs the Tuscan restaurant I Sodi) in addition to Via Carota, where they schedule themselves on alternating shifts. Still, in emergencies they sublimate their egos and jump on the line to help each other. “We have differences of opinion,” Williams says. “But we can finish each other’s plates, sentences, thoughts.” Before they opened Via Carota, they rarely saw each other — a common complaint for couples in the restaurant industry. By choosing to work together, these women have found a way to give priority to their family life without curtailing their ambitions.’

Meanwhile in Oz, Chris Manfield and Margie Harris have been partners in the industry for yonks, albeit Margie doesn’t chef. I’d be interested in what the dynamics are in a gay male couples’ restaurant. Anyone know?

The Designer Making Board Games You Can Eat

‘Around five years ago, she made her first edible board game (though in her opinion, it was only okay). “I’ve always liked baking and I’ve always liked games,” she says. Two years ago, after feeling inspired by an independent games festival, she decided to fully explore the edible game concept. The result is The Edible Games Cookbook, a game manual she plans to fund on Kickstarter starting this June.’

Don’t play with your food just got redundant.