The Death of the Democracy Sausage?

In November 2018, Bunnings, the Australian hardware retailer issued new guidelines for charities who raise funds from sausage sizzles outside Bunnings’ stores. A sausage sizzle at its simplest is the act of cooking thin beef mince sausages on a barbecue hot plate (never the grill section) and serving it nestled in the fold of a slice of white bread (buttered or not) or within a white bread roll (with no seeded crust) and topped with barbecued sliced white onions. The purchaser is then free to add tomato sauce, mustard or barbecue sauce as they please.

Traditionally, the onions in the sizzle go on top of the sausage, as does the chosen sauce. There is no structural or gastronomic reason for this; it just is the way it’s done. Bunning’s November guidelines upended this, requesting sizzlers to put the onions into the bread/roll first, and then the sausage. This was done, said Bunnings’ in the interests of safety. Bunnings’ legal boffins, backed up by eminent health and safety legal experts, had determined that the retailer was at risk of an handsome wrongful injury payout should some sizzlee injure themselves through slipping on greasy onion that had escaped its doughy environ.

Now, to this writer’s knowledge, and indeed to the knowledge of all those who commented in the general and social media, no-one has ever slipped on sizzler onions at any sausage sizzle, let alone one at Bunnings. It was unsurprising, then, when the consensus of the average sizzle was that the increasing tendency of Australians to ‘go to law’ at the slightest whiff of potential compensation for some injury no matter how trivial, this was nanny-stateism – the vernacular term for over-regulation by said State – taken to an absurd length, albeit it was a private company and not the State issuing these guidelines in this instance.

But the reaction did not stop there. The cry went up that nothing less than the Australian Democracy itself was at risk, via the undemocratic issuing of guidelines for the making of the icon of Australian elections – the Democracy Sausage.

Food historian Barbara Santich describes the sausage sizzle as ‘a uniquely Australian variant of the barbecue and almost by definition a public event – no one would ever invite friends to a sausage sizzle at home, even if identical food were cooked and eaten.’[i] The free sausage sizzle long has been a feature of weekend post-sports game bonhomie, recreational club get-togethers and the like social gatherings. In its fund-raising form it has been a staple of school fetes.

It is the association with the latter that transformed the sausage sizzle into the icon of Australian’s pride in our duty, enforced by a moderate fine for non-compliance (currently $20), to front up to polling booths on as many Saturdays as our three levels of government require of us to shore up Australia’s reputation as the very model of a democratic nation. Many polling booths throughout the country are in school halls and compulsory voting is a goldmine for the Parents’ and Citizens’ Associations (P&Cs) looking to supplement the money schools get from government grants. P&C dads and mums spend the week before baking cakes and biscuits, scrubbing down barbecues, searching for the tongs and spatula, chatting up the local baker, butcher and grocer to discount the sausages, bread/rol 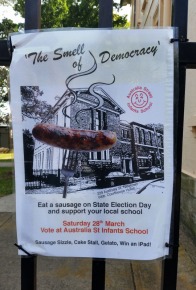 ls, onions and sauces, or better yet to give the gratis. They arrive at the polling booth hours in advance of them opening to make sure they catch the early voters with at least the cakes; getting the barbecue to just the right temperature for doing the sausages to a satisfying firmness and the onions to a delicate translucence tinged with a deep tan edge takes some time and fiddling and arguing and it’s unlikely they will be ready much before 11.00 am.

No-one can put their sauce and grease stained finger on just when the central object of the election day sizzle was monikered the Democracy Sausage. It was first recorded in 2012 and instantly embraced. So much so that in the July 2016 Federal election, Twitter changed its emoji for #ausvotes from a ballot box to a sausage lying on a slice of white bread topped with sauce, there are now three online sites that map where voters can find Democracy Sausages on polling day, and Instagram is at risk of meltdown as voters compete to post the definitive image of the icon and the variations being rung on it. Schools are named and shamed if their polling station does not offer them: private schools are particularly humiliated when failing this test of egalitarianism.

Indeed, so much has the moniker become a part of Australian English that in December 2016 the Australian National Dictionary Centre selected “democracy sausage” as its Australian Word of the Year.

Politicians too are at risk; in the 2016 Federal election, Opposition leader Bill Shorten was caught eating one from  the middle instead of the end and was Instagrammed mercilessly. In 2017, the eligibility of several members of the Federal Parliament was questioned on the basis that they may have held dual citizenship with other countries than Australia, including Barnaby Joyce, the Deputy Prime Minister, who was advised by the New Zealand government that he was indeed a citizen of that country through his father’s citizenship. Political cartoonist Matt Golding’s comment on this deployed the Democracy Sausage in a clever morphing of the brouhaha with the long-standing brouhaha over the origin of the pavlova.

In the November 2018 Victorian State election, the Age newspaper online ran a story, ith pictures, of how politicians ate, or did not eat, a Democracy Sausage, hoping for another Shorten ‘gotcha’ moment. Greens leader Samantha Ratnam was fingered as a vegetarian by a staffer who said she ‘would be opting for a meat-free sausage with onions on top and tomato sauce as an election snack later in the day’, part of the Democracy Sausage’s recent transformations to become inclusive of not only vegetarians but vegans via meatless sausages, people with coeliac disease by having gluten free bread rolls, and ethnic communities via the Democracy Falafel and the Democracy kebab. [ii]

But why was the Bunnings’ guideline seen as a threat to the democratic nature of the sizzle? The answer lies, I believe, not in whether or not the onions went on top of or under the sausage, but in that it was a multinational private enterprise attempting to impose its will on the egalitarian practice and practitioners of the sausage sizzle. Those of us who line up to fork over a couple of dollars at the weekend sizzle have chosen to put aside the knowledge that Bunnings allows said sizzle for its market capture and not as an expression of goodwill/social capital. It costs Bunnings nothing to host the sizzle. The charity-of-the-day provides all the equipment, ingredients, labour and dodgy signage; Bunnings only provides the venue, usually to the side of the main entrance, under cover. By being more concerned for the dubious hit to its public liability insurance than for the public cultural and social good Bunnings had made it impossible for us to know but not know.

A couple of weeks after Bunnings issued its new guidelines, I had occasion to go to Bunnings. I lined up with the others ordering a single or a double (sausage) with or without onions (yes, some people remain outside the cultural fold), interested to see whether that day’s sizzlers were compliant or not. The sizzlers were from one of the local Men’s Shed groups, set up as mental health support for men. In every bun that went out the sausage nestled under the onions. It may be they hadn’t got the email, but I like to think it was an act of quiet defiance.