Welcome all to the first Diggings for 2019. Sorry about the hiatus but Xmas and NY you know…still plenty of turnover in this ed. 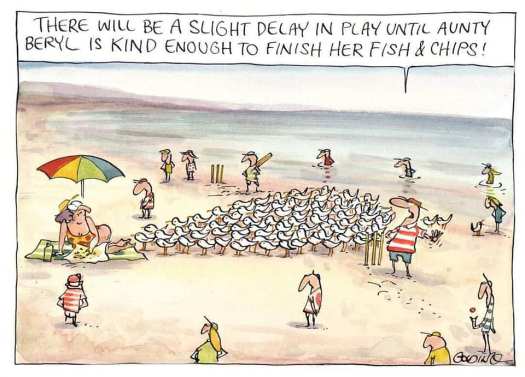 Crustaceans and low-omega 3 fish, such as basa and tilapia, which were identified as some of the least nutritious and least sustainable types of seafood, constituted a substantial amount of total seafood intake for the lowest socio-economic consumers.

In contrast, consumers in the highest socio-demographic group consumed mainly high trophic level fish, such as tuna and shark, and farmed fish with high omega-3 content, such as salmon and trout, which were considered the more nutritious types of seafood with a moderate sustainability. Less than 1% of adults reported eating sardines and mackerel which were considered some of the most nutritious and sustainable varieties.

The article unfortunately did not look at the price of the various seafood options, so I checked out what prices I could at Faro Brothers in Marrickville, my local fisho; sardines were going for $8 per kilo, mussels were between $6 – $10, bream was $26, ocean perch was $10, mackerel was $17, Atlantic salmon was $19, prawns were between $23 – 27, and tilapia was $7. Price clearly doesn’t reflect either nutrition or sustainability, but I’d be happy at these prices to live healthily and sustainably on sardines and mussels and ditch tilapia – the rat of the sea – quite happily. 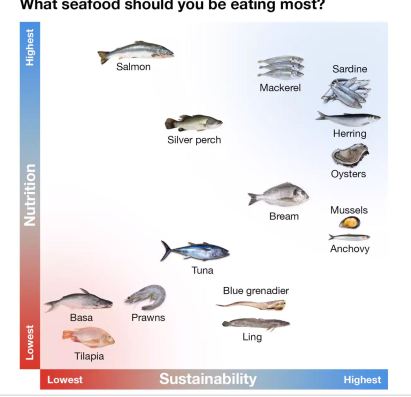 We have tracked the journey of tuna from the seas around Thailand to Australian supermarket shelves. This included interviewing more than 50 people, including people entrapped into forced labour. In doing so, we have been able to assess whether brands can say their supply chains are slave-free. We believe just one brand of tinned tuna can confidently claim slavery is not involved in its supply.

The article goes on to say that while Australian passed anti-slavery legislation in 2018 ‘ The law does not include penalties for non-compliance. There is no statutory body to provide guidance and oversight, as similar British legislation enacted in 2015 provides.’ Which is to day it is as useful as the proverbial. 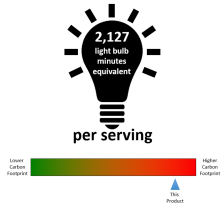 What’s your beef? How ‘carbon labels’ can steer us towards environmentally friendly food choices

Drawing on knowledge from the design of existing labels for nutrition, fuel economy and energy efficiency, we came up with the label shown below. It has two key features. First, it translates greenhouse emissions into a concrete, familiar unit: equivalent number of light bulb minutes. A serving of beef and vegetable soup, for example, is roughly equivalent to a light bulb turned on for 2,127 minutes – or almost 36 hours. Second, it displays the food’s relative environmental impact compared with other food, on an 11-point scale from green (low impact) to red (high impact). Our serving of beef and vegetable soup rates at 10 on the scale – deep into the red zone – because beef production is so emissions-intensive.

I like the idea of consumers having a ‘lightbulb moment’ when making environmental choices, but I think the authors are onto something more consumer friendly with the suggestion of a simpler system. Maybe just the banding?

While very popular in Japan, Malaysia, China, Taiwan, and Singapore, cheese tea has yet to attract a large following outside Asia. To some, the combination of cheese and beverage may sound unorthodox, but it’s a pairing that appears in other cultures as well. Finns and Swedes sip kaffeost, a cup of steaming coffee with a floating cheese cube inside, while Colombians stir salty, white cheese into hot chocolate to make a sweet-and savory beverage known as chocolate santafereño. 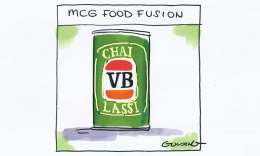 Are Smart Speakers with Screens the Ideal Kitchen Companions?

‘Indeed, the screen is most clutch for the non-professionals, as I found firsthand. “Google, how do I wash cilantro?” I asked while cooking curry. Without taking my hands away from what I was doing, I was suddenly watching a video of someone washing cilantro. As Gebreyesus said, he believes these screened assistants “can be of valuable use for home cooks or beginners in the field that are still lacking the basic skills.”

I am not one to romanticise the tactileness of a book and the staining thereof as one cooks, so I am totally up for tyring these out.

Is Organic Food Over?

‘In July of this year, the Nature’s Path cereal and grain brand made a loud exit from the Organic Trade Organization with a press release, citing (among other issues) the association allowing controversial members to join. Those members included BASF, one of the world’s largest producers of pesticides, and Cargill, a company that dominates the market for livestock feed (GMO grain) used in CAFOs. Goldberg of Organic Insider broke the story with an impassioned post outlining how misaligned the interests of the two companies are with the organic mission. (OTA CEO and executive director Laura Batcha said that while the companies do have other interests, the OTA only represents their interests in organic.)’

And in Australia meanwhile ‘There is no mandatory requirement for certification of organic product sold domestically in Australia. Many organic businesses however choose to be certified by an organic certification body to underpin truth in labelling requirements and promote consumer confidence.

Organic standards used in Australia are generally owned and managed by private organisations. Domestically marketed organic products are commonly certified by one of Australia’s six private certifiers who base their certification standards on the National Standard for Organic and Biodynamic Produce Edition 3.4 July 2009 (the export standard which is also referred to as the National Standard) used by the department for export certification. http://www.agriculture.gov.au/ag-farm-food/food/organic-biodynamic.

Many diners are concerned about the same ethico-political concerns that have arisen in recent labelling debates, such as fair labour conditions, nutrition, environmental degradation, fair trade and animal cruelty, as well as what restaurants give back to their local communities.

The more this information is evidence-based and transparent rather than marketing oriented, the more likely diners will start to pay attention and demand more from the places where they eat.

Being responsive and reflective is essential in this rapidly changing space, as consumers are spoiled for choice and are only likely to become more demanding. Restaurants can help diners to not only shape their eating habits, but also inform them in a way that helps them ask the right questions, rather than seeking set answers from celebrity chefs.

I wonder if we are asking too much of restaurateurs and chefs here? Terms like ‘evidence-based’ and ‘transparent’ are as contestable as what makes food and drink ethical. And how and at what point in the booking-to-dining chain would you provide what information. I happened to be reading Ronnie Scott’s 2014 essay Salad Days (about which I still have to decide whether it has substance or is just an unfocussed riff) the same day I came across this article and I came across this from chef Jesse Gerner: ‘People are more concerned about eating foods they feel like eating at the time. And a fun environment. Sustainability is a line underneath…I don’t think people like to be preached to.’ There is a ring of truth in that for me. Yes, I make ‘ethical’ choices but there are also heaps of times when I want to eat and let that ride for the sake of just enjoying the tastes of what I have been craving.

Seems to me something is awry in the training that secondary school food teachers are getting if this is the case.  How out of touch it sounds not to see that the environmental and ethical issues of food systems are fundamental to domestic consumption.

Do I contradict myself here vis a vis my comments on ethical dining? I don’t think so. I think there is a lot of worth in encouraging children and adolescents to ask questions about how our food is produced and to learn how to make even the direst of ethical choice something someone wants to eat.

The end of coffee: could Australia save the world’s beans?

Fairtrade Australia’s chief executive, Molly Harriss Olson, welcomes research into hardier varieties, noting that by 2080 wild coffee – a vital bedrock of genetic diversity for developing new varieties – could become extinct. She notes that expanding Australian plantations won’t prevent climate change’s impact on coffee growers in other countries. “More frequent and severe drought is associated with a deep and disturbing sense of failure, loss, powerlessness, heightened anxiety, stress, depression and an increased suicide rate among farmers,” she says. Harriss Olson urged coffee consumers to educate themselves about the challenges facing growers, seek out brands that are both carbon-neutral and help producers to adapt to a changing climate, and urge businesses and governments to pursue a carbon-neutral economy.  “It’s crucial that we all take action now,” she says. “Because the future of coffee, one of the world’s favourite commodities, and the livelihood and wellbeing of millions of coffee farmers, workers and their families is at stake.”

And speaking of ethical dilemmas…should Australia be in the business of ‘future proofing’ coffee supplies by taking over coffee production from those whose livelihoods depend on it or should Australia be focussing on research that benefits these producers?