Followers of Diggings will know I am a fan of both the democracy sausage and Matt Golding’s use of Oz food in his political cartoons, and this one is an excellent combo commenting on the now infamous Anning and Eggboy incident.

A Short Description of Cultural Appropriation for Non-Believers.

Generalising further, one may say that the characteristic British diet is a simple, rather heavy, perhaps slightly barbarous diet, drawing much of its virtue from the excellence of the local materials, and with its main emphasis on sugar and animal fats. It is the diet of a wet northern country where butter is plentiful and vegetable oils are scarce, where hot drinks are acceptable at most hours of the day, and where all the spices and some of the stronger-tasting herbs are exotic products.

Commissioned by the British Council in 1946 but unpublished till now, it would be interesting to have known what the brief Orwell was and why it was not published. It is both critical and almost romantic at times.

The Provocations of Chef Tunde Wey

At the head of the main table sits their host: slim, bearded, 35 years old, dressed in a dark dress shirt and slacks, and in no hurry to interrupt whatever ripples of uncertainty are traveling up and down the table. A helper moves in and out of an adjacent kitchen, quietly delivering Dixie Ultra paper plates of food. On them sits a southern meat-and-three by way of Africa: a version of efo riro, made with cooked-down collard greens; a pottage of mashed plantains; and finally, a Nigerian take on Nashville’s most famous culinary export—hot chicken. The name of this event is Hot Chicken Shit. The aforementioned “twist” is that while dinner is free for the black residents of the neighborhood, the prices for white visitors are listed on a pledge form at their seats: $100 for one piece of chicken; $1,000 for four pieces. For a whole bird, with sides, you must donate the deed to a property in North Nashville.

Thanks Barbara Sweeney for send me this: I envy those who have been able to be provoked, taking food and politics to a whole new level.

What will we eat in 2050? It’s no question that food is our greatest connector—but even with new technologies and changing eating habits our food system is in crisis. Hosted by the food design editor LinYee Yuan, Food Futures invites experts across the worlds of technology, agriculture, science and design to separate fact from fiction, inspiring each of us to become creative collaborators in shaping the future of food. Learn more at thisismold.com.

What will we eat in 2050? If we are still around that is. This is a series of podcasts from Mold magazine (ta Colin Sheringham for the link) The first bit about the guy who grew things from stuff from his body – yes, not just the waste, but…nah, you need to hear it yerself.

In other words, the era of unquestioning meat veneration is over. Maybe there will be no burger war at all! But as American politics currently stand, the burger is in danger of becoming radicalized, reduced to another symbol for Which America You Support.

And in another arena of the politics of food…What the article details, however, is that the radicalised burger has well and truly bolted out of the starting gate.

An Indomie Instant Noodles diner has popped up in Melbourne

The dollar-food of drunken students has made it onto a Melbourne menu. In fact, there’s a whole pop-up dedicated to it. HWKR Melbourne, a revolving marketplace of South East Asian-inspired pop-up diners has announced its new round of residents, including one by instant noodle brand Indomie.

Thanks, Helen Greenwood for drawing this appalling development to my attention. What has happened to the world when vowels can be dispensed with so casually! As for the indomie phenomenie – whatevs, as no doubt the response would be to fulminating about it. All I can hope for is that someone does a pop-up cuppa soup soon what with winter coming on.

Kebab urbanism offers an alternative to the spread of generic urbanism, fuelled by gentrification of many inner-city suburbs. They operate across many different spaces and spectrums – ranging from the car to the pedestrian, temporary to permanent, formal to informal. It is small urban gestures such as these that continue to diversify, enliven and humanise our cities. They insert human activities and the sense of security from being among people in spaces that would otherwise be considered unsuitable for socialising, or even threatening.

I came across a kebab stall made from a re-purposed container on the Old Windsor Road in a petrol station parking lot, but it was mid-morning and shut. My son Raj and his mates used to ‘cab to the bab’ after a hard night’s drinking.

The Very Real Search for the Bible’s Mythical Manna

In recent times, some have gone past trying to pinpoint what manna might be and attempted to taste the biblical food for themselves. Last summer, the Washington Post reported on D.C. chef Todd Gray’s quest to make manna the next big trend in haute cuisine.The manna that Gray and other chefs such as Wylie Dufresne use is a sweet resin imported from Iran that sells for $35 an ounce.

I wonder if this is the same resin as the manna gum eaten by Indigenous Australians, which comes from a species of acacia? I’ve tried various resins from gums and acacias in my time but am yet to find one that tastes worth the eating.

And a closing cartoon also from Matt Golding on wine in cans. 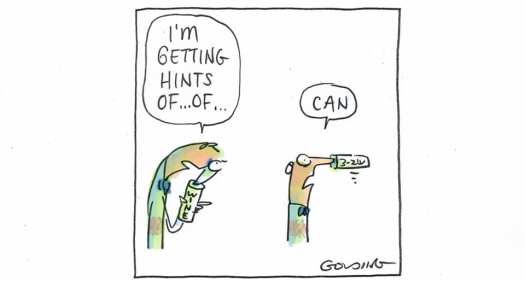