A brief history of indigenous fishing

While the importance of fishing as a way of life is obvious to many Aboriginal and Torres Strait Islander people, there have been few attempts to translate their experiences into a narrative that governments, non-Indigenous fishers and the general public can immediately understand and appreciate.

An excellent site in which to got lost for an hour or two.

The internet seems to have ushered in an unhealthy age of food fundamentalism. There are, for example, “bitcoin carnivores”: a small but intense community of cryptocurrency enthusiasts who believe that you should only eat meat and only use bitcoin. The internet’s ad-centric infrastructure has accelerated this march towards food fundamentalism.

…a recent meta-analysis of 4500 seafood product tests from 51 publications found an average of 30 percent were not the species stated on the label or menu…DNA barcoding [by the Marine Stewardship Council ] to validate the species identity of 1402 certified seafood products derived from 27 species across 18 countries [however found] that in over 99% of cases species labelling was correct.

I don’t rate high my chances of finding MSC DNA bar-coded fish in my local fishery.

Cooking for Assimilation weaves family interviews, recipes and the music of Evi’s 1950’s kitchen radio with archival material drawn from Australia’s film heritage. It’s an intimate portrait of one woman’s migration story against the backdrop of Australia’s rocky transition to becoming a multicultural nation.

A lovely podcast contributing to our store of knowledge of the live of ‘reffos’ in Australia during the war years. I happen to be reading Backyard of Mars. Memoirs of the “Reffo” period in Australia by Emery Barcs who was also a refugee from Hungary. Also has some nice material about reffo food experiences. 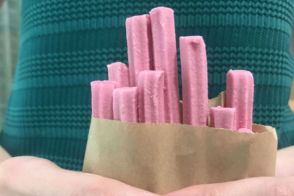 Love it or hate it, the musk stick is one of Australia’s most misunderstood treats

There are plenty of complaints online, from their strange shape to their chalky texture, but the powerful perfume scent seems to be the most off-putting thing about musk sticks. Their taste has been variously compared to a nice-smelling shop, grandmother’s make-up and even “the smell of old ladies at the bus stop”. Surprisingly, only one of those comments comes from a wholly negative review.

I recall vividly my first encounter with these pink, heady sweets at the tuckshop at St Patrick’s Primary School, Singleton when I was eleven years old and had been in Australia a bare 12 months. I was intoxicated by the colour and the smell and the taste was transporting – it still is, one of my strongest taste memories. A poll I did on my Facebook page was fifty:fifty on luv/yuk.

And while we are on the subject of school and food…

Our ARC project Children as Health advocates: assessing the consequences commenced in 2016. That project emerged as a result of our concerns about obesity discourses and assumptions by policy makers and public health institutions that schools are a key place where ‘obesity’ can be tackled. In particular, we noted that schools are being called on to mobilise children as health advocates within their families and that multiple school food programs have emerged in part as an attempt to curb the obesity problem. But we wondered what happened when schools recruit children to address their family’s health practices: What were the messages emerging in school food discourses? Were these ‘messages’ effective for children? How did children feel about this responsibility if so? How did families respond if children were sharing school food messages at home?

Links to the exhibition of the seminar I went to in Melbourne of some of the results of this Monash study and a link to the first report.

The Promise and Perils of Resurrecting Native Americans’ Lost Crops

‘’ELIZABETH HORTON NEVER INTENDED FOR Plum Bayou to become a testing site for recovering lost crops. By planting historical staples such as Chenopodium berlandieri, a type of goosefoot and a cousin of modern-day quinoa, she sought to teach visitors about the agriculture of the Toltec Mounds Archeological State Park’s original inhabitants. Yet Horton’s plants aren’t originals—they’re wild cousins of the crops that fed North America since at least 3900 BC. Due to a Native shift toward maize cultivation around 900 AD, and the devastation of Euro-American colonialism, these “lost crops” have been extinct for 500 years.’

I haven’t come across any references to lost crops in Australia. Anyone else? Perhaps the lack of a shift in cultivation as far as we know, and the recency of the planting of European crops in native grassland areas has protected them?

Kadri joined forces with fourth-generation farmer Kasaraneni Prabhu, who was growing an orange-red heirloom variety in Andhra Pradesh, and an ethical turmeric business was born. When the first batch sold out online within four hours, it was the start of Diaspora Co., a single-varietal turmeric company that puts profits back in the hands of Indian farmers. The business aims to challenge the commodity spice trading system introduced by the British, marking Kadri as one of a new generation of chefs and entrepreneurs working to disrupt the colonisation of food and the Western gaze. 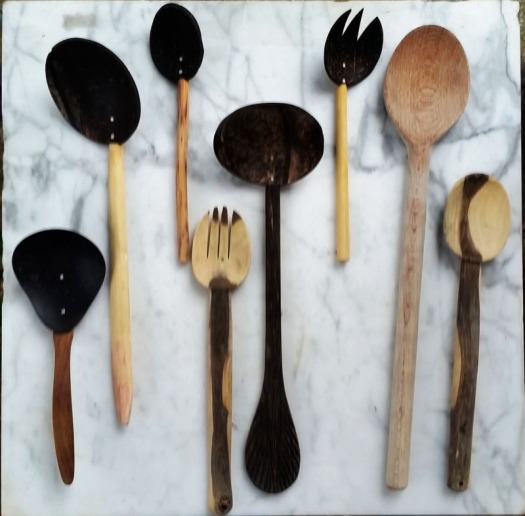