Fictitious Dishes: An Album of Literature’s Most Memorable Meals (public library|IndieBound) — an ingenious project by designer and writer Dinah Fried, who cooks, art-directs, and photographs meals from nearly two centuries of famous fiction. Each photograph is accompanied by the particular passage in which the recipe appeared, as well as a few quick and curious factlets about the respective author, novel, or food.

Set me thinking of some meals I have read about that would be interesting to photograph – one that comes immediately to mind is the chocolate that Winston Smith and Julia O’Brien eat in what they think is the safety of their tryst room.

Fresh Produce, Brought to You by Robots

In San Carlos, California, under LED lighting in a controlled, 8,000-square-foot environment, a team of autonomous robots is whirring night and day between rows of leafy greens. There is no dirt, there are no pesticides, and on this indoor farm, the only humans work behind screens. This is one of the world’s first autonomously operated commercial farms, and their produce is now flying off the shelves.

I could hope it was the quality of the produce that is having it fly off the shelves…But I suspect it’s just  another foodie fad coming on.

And in other robot news… 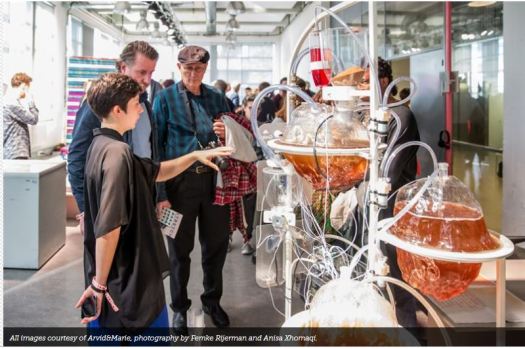 The idea of SAM was always to show that we can make simple machines that inspire new futures and that we can take the development of technology and food in our own hands. Developing an easy to build SAM is a way for us to democratise these ideas even further. The already existing SAMs are still actively touring and giving away drinks and hopefully ideas.

Canadians Were Better at Clamming 3,500 Years Ago

While First Nations people knew the value of these traditional practices, researchers had yet to examine how clam populations under traditional management systems stacked up against current-day aquaculture. Lepofsky and her team found that, even as human populations expanded and began consuming more clams around 3,500 years ago, clam gardens created a shellfish boom. From the advent of clam gardening to its decline under European colonialism, clams grew larger and more abundant than they had before human intervention.

The parallels with recovering Indigenous Australian practices are striking.

Proceedings of the 22 Symposium of Australian Gastronomy

Hi all a selection of the paper presented at the 22nd Symposium of Australian Gastronomy in November 2018 are now online.