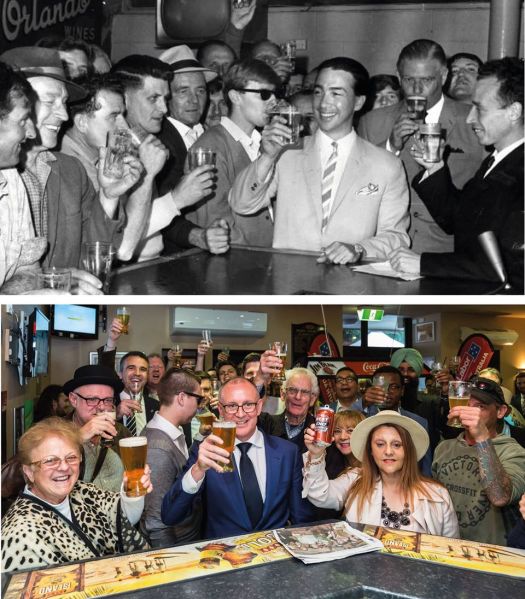 What, you don’t know what the six o’clock swill was!

Mandy Fox recalled “breaking down” a week before she found out she was Indigenous and not understanding why. “When I found out my mum was from the Stolen Generation, it opened up something in me,” she said. The passionate Murnong Mamma member credits the group with giving her a sense of connection and purpose for what she said was the first time in [her] life.

“I’m so passionate about this, to use things from the earth that are Indigenous,” Ms Fox said.

“We are so lucky and to put it out there for people to come eat and be happy, it changes lives.’

Always exciting when I hear of another where the economic benefit from bush tucker goes back to Indigenous people, and even more glad to read here of the emotional benefit also.

‘Alla will soon be welcoming an Institute of Gastronomy in her home of Daylesford. It is intended to be a centre for learning that ranges from artisanal skills to produce provenance and sustainable practices. It’s hoped that through these teachings the school will form a strong collaboration between the worlds of education, agriculture, food production, hospitality and culinary tourism sectors.’

It will be interesting to watch this over the next years and how it will establish its point(s) of difference with the various TAFEs, culinary institutes and uni food studies sectors.

And in other good news in Oz…

‘According to the Modern Food Trends Report, published by insurance comparison provider,  Choosi, 85.7 per cent of all Australians say they are currently trying to follow a healthy diet.

The decision is however coming at a cost, with families spending AUD $4, 515 more each year in order to eat healthy or to follow a special diet.’

Which to me reads differently to the headline for the article. It says to me that we are prepared to spend money on health alternatives, despite the hip pocket hit. Goodonus.

‘In other words, the only way “high vibration” dining could have any grounding in reality would be if servers actually shook the dishes really, really fast while placing them on the table, which seems rather alarming and messy. Attributing vibrational goodness to the ingredients themselves is utterly uncoupled from medical or nutritional reality, and is merely a novel way of saying “magic.” However, a magical pathway to wellness is an appealing thought, so it’s no surprise restaurants would start using it as a way of attracting patrons.’

Anyone come across a Sydney high-ender doing this – I would so love to go there and make a scene.

Simplot plans for Chiko Roll to take on the world

‘Simplot will be taking the iconic Australian Chiko Roll to the world’s largest export trade fair in Germany as part of plans to expand its global footprint. Simplot will promote the Chiko Roll at the October 2017 Anuga trade show which is expected to attract more than 160, 000 visitors from retail and foodservice markets globally. It is the first time Simplot has taken the Chiko Roll outside of Australia.’

Huzzah, say I! Back in 2002 I wrote an article for the much missed Divine magazine celebrating the 50th anniversary of the Chiko Roll.

‘Our Google Maps adventures also revealed some more trivial patterns: the locations of Gelato Messinas and Bailey Nelson stores, for example, almost perfectly overlap — each existing in concentration around the gentrified and hipster inner city, while also ticking boxes in key shopping districts like Parramatta and Miranda, to ensure their scope just extends to more suburban parts of Sydney. But from the ‘Great Dessert Divide’ — an easy way to map the city’s gentrification — to the ‘Harris Farm Hedge’ — which carves the clearest picture of Sydney’s richest regions — it becomes clear that residents of Sydney today are on footing that’s far from equal.’

A delightful bit of research that I soooooo want to test.

From Refugee Chefs, a Taste of Home

‘In a country where the dominant narrative is that refugees live off the state, and a burden on the society…’

‘Activists point to the palm oil sector as a main culprit in the degradation of the protected areas. The Rainforest Action Network (RAN) has released a series of reports, the most recent in July 2017, accusing palm oil companies of having links to deforestation in the Leuser Ecosystem. Oil palms cover almost 11m hectares in Indonesia, while new plantations have been increasing at a rate of between 300,000-500,000 hectares per year for the past 10 years. Putra, who was awarded the Goldman Environmental Prize in 2014, first picked up his chainsaw after his hometown in the district of Aceh Tamiang was razed by the floods in December 2006. A World Bank report linked the floods to the deforestation in the area and estimated the total losses at $210m. ‘

Don’t know the situation in Indonesia, but in Papua New Guinea palm oil plantations are also a site of child labour and sexual abuse.

And in further damning evidence against the rampaging palm oil industry…

‘Use of palm oil for biodiesel is also on the rise with 46% of the crop imported into the EU used for biodiesel in 2015. In the face of criticism about biofuels’ link to rising food prices and deforestation, the EU agreed to cap the use of food-based biofuels at 7% in 2015. The EU is now debating whether to keep this at 7% after 2021 or cut it further, as a number of NGOs are calling for. Last week, the UK agreed to cap its use of food-based biofuels at 4% of UK road fuel next year, dropping to 2% by 2032.’

Farmer wants a revolution: ‘How is this not genocide?’

I’m doing a lot of reading right now about the ideological underpinnings of the colonial project, particularly the influence of the Enlightenment and the rise of ‘progressive agriculture’. It seems to me paradoxical that this was a move to putting agriculture on a more ‘scientific’ footing through analysis and experiment, but they failed to apply the same principles when they began farming in Australia, that is, of analysing what was different about the soil and climate here instead of attempting to plant the same crops with the same methodologies leading ultimately to an agriculture heavily dependant on chemical fertilisers.

Nestlé Makes Billions Bottling Water It Pays Nearly Nothing For

“It has to do with the privatization of water and taking the people’s water and making a profit from it, an exorbitant profit, a ridiculous profit, when there are people with no water at all, or people with poisoned water,” she says. “We don’t believe water should be owned by anybody. It’s a public right.” Depending on how Michigan rules on Nestlé’s bid to pump more water in Evart, Case’s group may take legal action. How it will pay to challenge the Swiss conglomerate a second time, she doesn’t know. “We might,” she says, “end up back in bake sales.”

The frightening part of this article is not the predictable profit gouging of a natural resource, but the cavalier dismissal of concerns about the level of water extraction in the belief that water will always be where it is now, continually renewed as holy springs, when the evidence is that water sources everywhere can and do dry up with devastating ecological consequences.

Could lab-grown fish and meat feed the world – without killing a single animal?

‘Tetrick is a controversial figure. He recently fired three top executives who he claimed were planning a coup and when we meet, he is plotting to control the cultured meat industry, buying up patents across the globe.’

And therein, as Willy the Shake would say, lies the rub. For all the talk about feeding the billions cheaply it still comes down to profiteering. No-one is going to be open sourcing their techniques. And you can bet that those producing the stuff will continue to find ways to cut corners in the production and market something less nutritional to the masses while reserving the high-end product for the wealthy.

‘Bras, dressed in his chef’s whites, announced his decision in a Facebook video with the local landscape rolling out behind him, saying: “Today, at 46 years old, I want to give a new meaning to my life … and redefine what is essential.” He said his job had given him a lot of satisfaction but there was also huge pressure that was inevitably linked to the three Michelin stars first given to the restaurant in 1999. He asked to be allowed to continue his work with a free spirit and in serenity away from the world of rankings, without tension. He said he wanted to be dropped from the guide from next year.’

What him being ‘dressed in his chef’s whites’ has to do with it is beyond me, however…

He aint the first or the only…

Why Chefs ‘Give Back’ Their Michelin Stars

‘Still, chefs continue to dramatically reject their Michelin status. While they can’t force the guide to remove their restaurant from published books, they can close and reopen under new names. That’s what chef Karen Keyngaert told Munchies she planned to do this year, after her Flanders restaurant received a Michelin star she describes as “in these economic times… more of a curse.”

‘It’s fashion week in Paris right now, and apparently the only thing on the minds of Dolce & Gabbana’s design team is food. Honestly, the luxury brand’s Spring 2018 collection looks like the team rummaged in their fridges and pantries for inspiration and made some dresses out of it.’

And just for pure frivel…